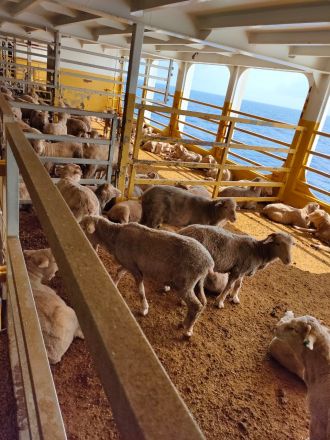 The MV Al Kuwait, a purpose-built live export vessel, has been released from quarantine. The crew, including veterinary and stockpersons are on board, fodder is loaded, and livestock will be loaded in the coming day in order to depart in accordance with the requirements of the exemption.

Heat stress risk mitigation was the focus of RETWA’s exemption application. Mitigations include the removal of heavier sheep that can be less heat tolerant, ensuring wool length of less than 20mm, not loading specific areas of the vessel, a significantly reduced stocking density and active voyage management with regular expert input on weather routing, animal physiology and livestock management.

The total number of sheep that will be loaded has been further reduced to meet additional requirements placed on RETWA. It is estimated only 35,000 sheep will be loaded onto the Al Kuwait before it sails.

Unfortunately, a delay in loading was caused by a last minute appeal against the exemption. This appeal has been rejected by the federal court, and loading is commencing today. Everyone has worked tirelessly including the regulator to enable the AL Kuwait to depart for the Middle East.

“This consignment is significant for our long-term trade partners in Kuwait.” says Mike Gordon General Manager RETWA. “It has never been more important to value and service our trade partner relationships than during this time of global food insecurity.”

For decades families across the Gulf have relied on high quality, healthy, fresh sheep meat and benefited from our sheep producers. The long-term trade partnership between KLTT and Australia supports Australia’s globally respected sheep producers and their rural communities.